by The Robotic Hands of God 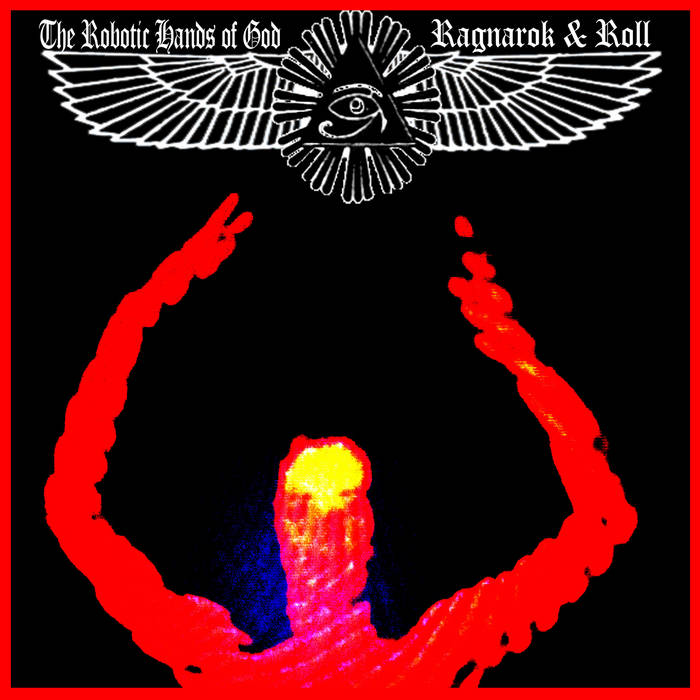 "Have you heard about that interview with Billy Ray Cyrus?" RHOG asks me, referring to Cyrus' lament that Miley's career has destroyed their family. "I guess there is a potential that there is an evil sorcerer pulling the strings behind rock music."

RHOG's joking, but he draws that belief for the latest installment in his Robotic Hands of God series, the satirical album Ragnarok N' Roll. RHOG (also of experimental hip-hop duo Dreadnots) describes it as "the story of the resurrection of rock music from the dead, as told by ex-rock 'n' rollers turned electronic musicians."

The album explores and exposes warnings against rock 'n' roll's evils, even as it reinforces its mystique, and generates a feeling of apocalyptic dread. Buried throughout the album are samples of rock greats, as well as "the ones responsible for killing rock 'n' roll." The samples may make RHOG's label, Audio Reconnaissance, a little nervous, though it's doubtful even Lars Ulrich could pinpoint Metallica content in the dense aural collage of heavy beats, dark psychedelic loops and cultish conspiracy theories.

The record begins with Jim and Tammy Faye Bakker playing records backwards, attempting to decipher hidden satanic meanings. The track "Mark of the Beats" features an explanation of The Beatles' socialist plot to break up the American family, and in "Ragnarock-Steady" a member of a doomsday cult denounces Scooby-Doo, Kenny Loggins, Ghostbusters and Huey Lewis.

Both Ragnarok N' Roll and its companion album, 2009's Voice of the Last Days, include recordings of RHOG's tripped-out calls to prayer hotlines. On the last album, he asked God to make his beats fresh. This time, he asks if rock music really is the tool of Satan.

"I think all rock music fits in that category," the operator replies.

"The latest release from Pittsburgh based production outfit the Dreadnots is another dope one, as they offer up a satirical instrumental concept album exploring the belief that rock music is a tool of satan. Get it now for the cheap pre-release cost of $3.33. The offical release date is 4/19/11 and it will be available on iTunes and pretty much everywhere else downloads are sold."

The Dreadnots are a sample-based beat and vocal driven outfit that apply experimentation heavily in their sounds. This is outsider music for the inside of yr head.


Fans of of left-field hip hop, 60′s Psychedelia, and experimental music of all sorts should appreciate the unique sounds that these guys are meticulously piecing together. ... more

Bandcamp Daily  your guide to the world of Bandcamp

Featured sounds by K.Spark and WIZDUMB, plus Basi joins the show to discuss his latest release.