Voice of the Last Days

by The Robotic Hands of God 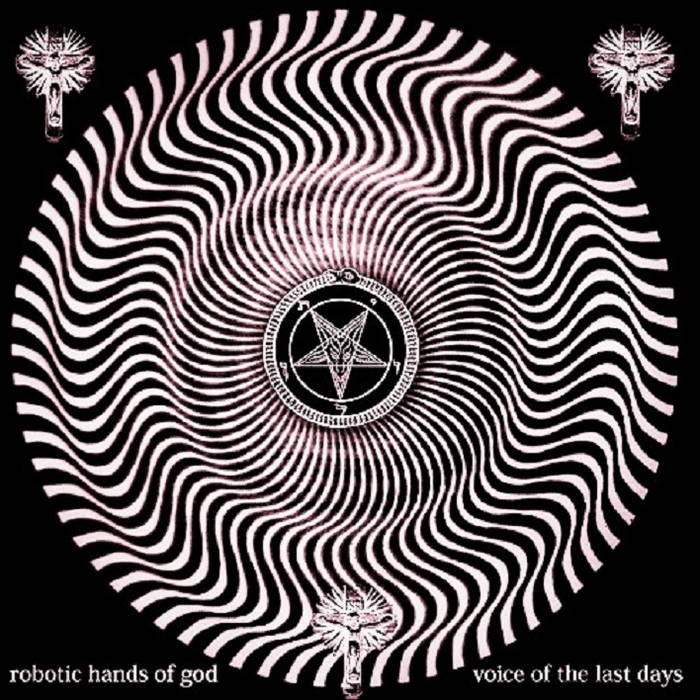 Travis Ries One of the worst days of my life was loosing this CD, so happy it's on band camp. Favorite track: Number 3.

"The Dreadnots release a CD of disturbing, apocalyptic psychedelia

In Deuteronomy 1:29, Moses admonishes the Children of Israel to “dread not, nor be afraid” of the Canaanite warriors. Local abstract hip-hop collective The Dreadnots took their biblical namesake a bit seriously on their latest CD, heavily based on an apocalyptic version of Abrahamic religion.

The disc, essentially a solo production by member Jeremy Coleman, begins with Coleman calling up a Christian radio show and asking, “I’m hoping that the Lord can make my beats better—is that possible?” The incredulous host responds, “You want the Lord to do what?” It only gets stranger from there.

Over 13 tracks, Coleman’s molasses-thick rhythm programming and sampling (mostly obscure, flute-laden Euro-prog) meshes with menacing snippets from both extremist preacher Brother Stair and Church of Satan head Anton LaVey, a phone call to a sex line and some audiotapes from schizoid patients. The result is disturbing, hallucinogenic psychedelia, a dark flipside to the lighter, hazy efforts of the Black Moth Super Rainbow contingent.

Few have plundered Christian/occult wackos with such impunity since the efforts of industrial bands like Front 242 and Consolidated, so this return of paranoid eschatology is more than welcome. The “God = Satan’s Dad” theme isn’t explored often—the only direct comparison I’ll draw is to Negativland’s “It’s All in Your Head” performance, which deconstructs fundamentalist religion, or maybe The Residents’ “God in 3 Persons.”

The Jews wandered for 40 years after tripping balls so hard that they perceived their foes to be Nephilim (giants). Hopefully the Dreadnots’ immersive, topical experience will entice listeners to come in from the wilderness a bit sooner."


The Robotic Hands of God is an expedition into the concepts of the so-called final days, good and evil,
psychosis, and God’s identity crisis. The album unites sound samples from extreme Evangelical Christians and practicing initiates of the occult while placing the listener somewhere in the midst of a battle raging between God and Satan; who ultimately must be the same being. One record housing two polar opposites. Featured throughout the recording is a narrative by Brother Stair of the Overcomer Ministries, based in a South Carolina compound similar to that of the Branch Davidians. This man claims to be the last day prophet of god--the next best thing to having god on the album. Brother Stair broadcasts 24 hours a day to warn any listener of what he believes to be the end of the world. Countering the extreme intensity of this man are segments of Anton Levay, Texe Marrs, Freeman, audio diaries from psychotic patients, and a grimoire of subliminal messages throughout the recording. This album is a seemless blend of live instrumentation, including vintage synths, percusion, bass pads, and sample-based rhythms. The majority of these samples are from obscure european prog rock albums from the 60’s and 70’s to pay tribute to the style the album is fashioned after. The album is recorded and mixed on
pirated software that is the same used in today’s state of the art studios. Other equipment features vintage samplers such as the SP-1200, MPC2000XL, SP202, tape echo, and much more digital equipment of today’s electronic age.

The Dreadnots are a sample-based beat and vocal driven outfit that apply experimentation heavily in their sounds. This is outsider music for the inside of yr head.


Fans of of left-field hip hop, 60′s Psychedelia, and experimental music of all sorts should appreciate the unique sounds that these guys are meticulously piecing together. ... more

Bandcamp Daily  your guide to the world of Bandcamp

Featured sounds by K.Spark and WIZDUMB, plus Basi joins the show to discuss his latest release.